Home Business The EU In The Crosshairs 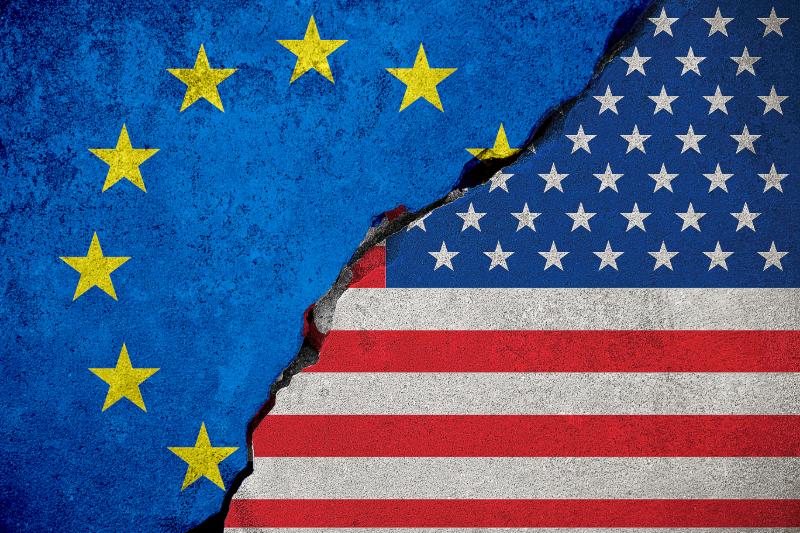 All quiet on the Eastern Front, but is the Trump administration considering a new battle of trade…with the European Union?  The trade conflict between the United States and China is off the front burner with the apparent agreement between the two countries on a ‘Phase One’ trade resolution.  Emboldened by the negotiation victory, the recent WTO ruling in favor of Boeing over Airbus, and the arrival of fresh-faced leadership at the EU, President Trump’s administration is once again looking at Europe as a possible soft target for trade war threats.  Is the EU ready to counter this threat and what risk does this potential trade war entail for businesses that work between the two major economic powers?

The 2018 ‘cease fire’ largely thanks to personal diplomacy

In the summer of 2018, the U.S. and EU side-stepped a potential trade war after the then-Commissioner of the EU, Jean Claude Juncker, negotiated a trade conflict ‘cease-fire’ with President Trump during a visit to the White House. Juncker’s efforts paid substantial dividends. A potential trade conflict with the U.S. was delayed to allow the USTR and EU to begin exploratory talks, in hopes of finding a solution that would not dispute the world economy any further in light of the U.S.-China trade conflict and concerns over the status of NAFTA negotiations. Up until that point, the President had made a point of naming European (especially German) automobile manufacturers as future targets of U.S. tariffs.  Since then, U.S. and EU trade negotiators have made little apparent progress towards a solution to their trade grievances, and the WTO’s ruling against Airbus has further roiled the trade waters between the two largest trading partners in the world as the Trump administration continues to raise tariffs on aircraft imports, and is maintaining punitive tariffs on French wine and Scotch, among other products.

A change in EU leadership is yet another reason for the U.S. administration to re-evaluate its trade relationship with the Europeans.  New faces and names throughout senior leadership positions in the EU and the recent and dramatic departure of the former U.S. Ambassador to the EU, Gordon Sondland, present a starkly different arena for U.S.- EU trade negotiations and relations.  Whatever personal persuasiveness Jean Claude Juncker had with President Trump, it is already a thing of the past. Combined with the comparative inexperience of new Commission President Ursula von der Leyen, the departure of stalwart Commissioner for Trade Cecilia Malmström leaves the US with a relatively blank slate on which to start a new phase of negotiations and will likely encourage the Trump administration to revisit concerns about perceived ‘unfair’ trade practices by the European Union.

The lull in US-led trade conflicts is likely brief, as President Trump has made it his adage that trade wars are ‘good, and easy to win’ and he is in the last year of his initial term with very little to lose, from a domestic politics perspective, from antagonizing the EU with demands for an

improved trade deal.  Consider that the U.S. will now be dealing with a European Union that no longer includes its special ally and significant trade partner, the United Kingdom, following their recent ‘Brexit’ departure from the union.  Angela Merkel is occupied with the collapse of her party in German following the departure of her preferred successor, and France’s President Emmanuel Macron has, at best, a prickly relationship with Donald Trump. With that in mind, there are fewer barriers keeping the current administration from picking a fight with the EU to appeal to a core voter base which looks at Europe as a manufacturing competitor.

What does this mean for businesses?

The application of tariffs between the U.S. and EU over the last two years has been highly focused on certain sectors in order to inflict maximum pain on key voting blocs – Tennessee whisky on one hand, French cheese on the other as typical examples of the targets.  Up until this point, the European automobile manufacturing industry, especially Germany, has been left out of this fight due to their substantial investments in the United States. It seems likely that this abeyance is coming to an end unless the EU is willing to offer agriculture and service access to U.S. companies, as President Trump has consistently pointed to imports of Mercedes and BMW automobiles as a scapegoat for unfair European competition.  His administration has suggested that auto manufacturing is also a national security concern, which would give President Trump the authority under GATT Article XXI to unilaterally impose tariffs as he previously did with steel. Companies that rely on parts or commodities from Europe may have to shift to alternative sources on short notice if these tariffs are imposed, as the Department of Commerce showed little inclination to grant exceptions to steel or aluminum tariffs in the last two years.

Is the EU prepared to fight back if there is a trade conflict?

Economic growth in the EU has been anemic since the 2008 recession, but as a region it would be able to withstand a trade war with the U.S. well beyond the current election cycle thanks to the large and diverse internal European market.  Additionally, the EU has threatened to implement more protective policies in the last few years as a response to growing competition from China and U.S. unilateral trade actions. This ‘Fortress Europe’ also has a backdoor to healthy and welcoming markets in Japan, Canada, Australia and MERCOSUR countries courtesy of a series of savvy trade agreements either wrapped up or substantially negotiated in the last few years.

The EU is also playing a long game on the taxation and control of U.S. companies, especially tech companies.  Google, Facebook, Apple and Amazon are all under the microscope in the EU over concerns ranging from tax practices to data privacy and potential competition law violations.  It seems unlikely that these concerns of greater scrutiny from the EU will be enough to rein in the Trump administration if the President determines that a high-profile fight with the European Union would serve to bolster his re-election chances.  Companies that operate in both markets must plan now to deal with the political and economic fallout of having the EU in the crosshairs of the Trump administration, as a potentially protracted trade battle is looming.

Mr. Samson was a U.S. diplomat and international law advisor and is the owner of Samson Atlantic LLC, a Chicago-based consulting firm which offers market research and political risk assessment.