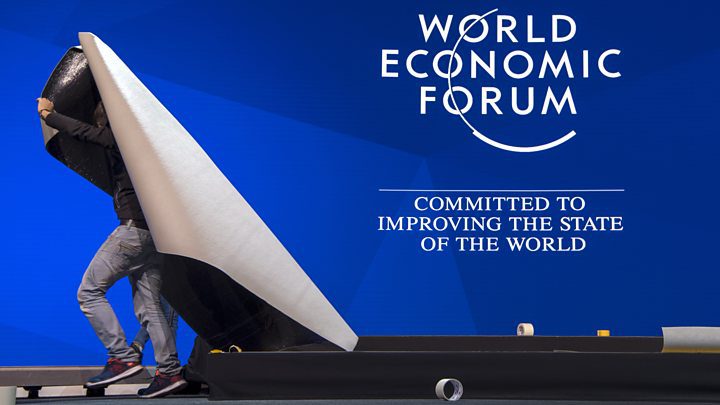 The World’s leading Political and business honchos arrived in Davos Switzerland this week for this year’s Worlds Economic Form. There are many themes in Davos 2019 but they will follow a green agenda, similar to previous years, with panels examining global consumption, sustainability and pollution.

The action started off in Davos on Tuesday, with German chancellor Angela Merkel, Japanese prime minister Shinzo Abe as well as the likes of Bill Gates , Brazilan Prime Minister Jair Bolsonaro. From the business world Goldman Sachs boss David Solomon and Centrica chief executive Iain Conn are scheduled to speak on day one of this year’s forum while Sir Martin Sorrel  former WPP  boss, is at the summit, representing his new venture S4 capital.

Politically at Davos this year Donald Trump had to the cancel due to ongoing government shutdown while Angela Gurria , secretary general of the OECD has warned that the chance of a no-deal Brexit is “getting bigger every day”. He told the WEF summit that the UK’s departure from the EU is a systemic issue, with far reaching consequences. The economic impact of Brexit is “materialising gradually”, he said, but there will be thousands of questions about the outcome. With America’s delegation grounded, Secretary of State Mike Pompeo addressed Davos by satellite link and hailed Brexit and Trump presidency as new in world politics

On Tuesday Brazil’s newly elected president, Jair Balsonaro  issued a warm welcome to businesses and investors. Mr Bolsonaro told the summit that his government would make Brazil one of the top 50 countries in which to do business, with plans for tax reform, social security changes and removing the “heavy weight” of the state. ​

Mr Bolsonaro launched a pitch to investors in the room, saying he will fight corruption and money laundering, improve security and open up the country to investment.”I admit I am very moved and I do feel very honoured to be in a position to address such a distinguished audience,” he said as he opened his speech, before stressing the world’s eighth largest economy is open for investment in front of an audience of business and political leaders. Brazil’s economy is still relatively closed to trade and it is my administration’s mission to change that,” Mr Bolsonaro said.

Brazil’s economy, which was once the fastest growing in the world, has struggled to recover from its deepest recession in decades, but economic forecasts are positive.n September, the Brazilian central bank predicted 2.4 percent GDP growth, compared to 1.4 percent in 2018.

Mr Bolsonaro said the country will invest heavily in security infrastructure to reignite its tourism industry, stressing the beauty of the Amazon rainforest, encouraging investors to bring their families to see if for themselves.Much of Mr Bolsonaro’s plan for improving security in the country stems from the liberalisation of firearm legislation in a country already awash with guns.

In line with the strong environmental theme running through the conference, Mr Bolsonaro also spoke of the need to preserve the country’s natural resources.”The environment must go hand in hand with development efforts,” Mr Bolsonaro said.

“We will work with the world in decarbonising the economy, reducing CO2 emissions and of course preserving the environment,” he said.he Brazilian president was interviewed by Klaus Schwab, the founder and chief executive of the World Economic Forum, who announced Brazil is the location for the Latin American summit next year.

In other parts ,Citi’s CEO said that Brexit will go down to the wire while Prince William interviewd the great David Attenborough , the broadcasting legend warned that humans now had the power to exterminate whole communities of living creatures ‘at will’.