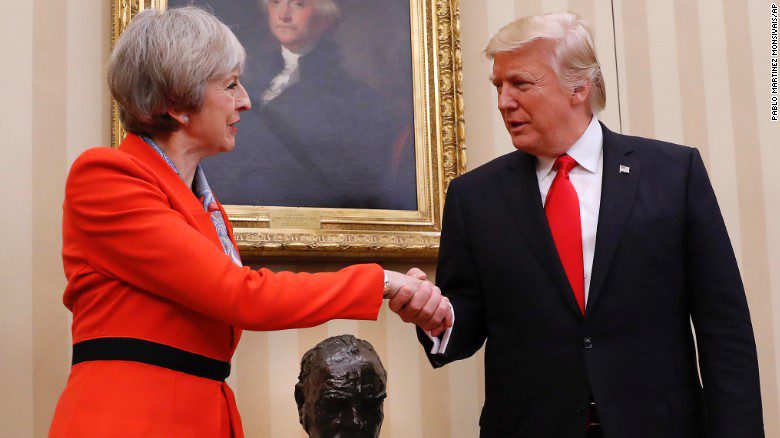 With the coming’s and going of the last few weeks with  The UK’s supreme court ruling that the UK has to have to have an act of Parliament to trigger article 50  Theresa May is set to meet Trump tomorrow as the new US president’s first meeting with an international leader .She is proposing to start  groundwork for a U.S.-U.K. trade deal, the outcome will provide the first test for how world leaders can deal with Donald Trump.

“As we rediscover our confidence together –- as you renew your nation just as we renew ours –- we have the opportunity, indeed the responsibility, to renew the special relationship for this new age,” the U.K. prime minister will tell Republican lawmakers gathered in Philadelphia on Thursday, according to excerpts from her prepared remarks. “We have the opportunity to lead, together, again.”

Bloomberg News said that the good news for May, who’s due to meet Trump at the White House on Friday, is that he’s eager to cement relations and nail down a U.K. trade deal too — for his own reasons. He’d like to further drive a wedge into a fractured Europe and strengthen at least one trade relationship as he exits the Trans-Pacific Partnership and prepares to renegotiate Nafta.A close relationship between the U.S. and U.K. would prove that neither nation is turning inward — Trump after an election victory fueled by his “America First” campaign, and May as she takes Britain out of the European Union after last year’s Brexit referendum.

So May is opting to brush aside the worldwide protests that followed Trump’s inauguration and worked hard to secure Trump’s first meeting in office with a foreign leader.Even more ridiculously , many MP’s are shouting that she should consider herself as a woman first before she heads out to see him

Trump has been quoted as saying , it’s a chance to show that world leaders are eager to meet with him despite his heavily opposed inauguration ceremony. He pledged then that “every decision on trade, on taxes, on immigration, on foreign affairs will be made to benefit American workers and American families.”

Theresa will implicitly reject the idea of a U.S. withdrawal from international entanglements. “The leadership provided by our two countries through the special relationship has done more than win wars and overcome adversity,” said May.

However, a successful meeting would also put the European Union in a weaker position, as it would show that countries potentially contemplating leaving the union, have a green light in contemplating bilateral deals with the US. That was when  Michel Sapin deicded to comment and said “Madame May can go see whoever she wants. I understand she goes to see the new U.S. president given the history between the U.S. and the U.K” However, he added, “she is not going there to negotiate,” Sapin says in interview in Brussels. “Neither she nor Mister Trump are in a position to negotiate. It’s a courtesy visit.“

Trump and May don’t seem to think so but for the minute at least , diplomacy , in this very interesting and  strategic political chess game is the key factor