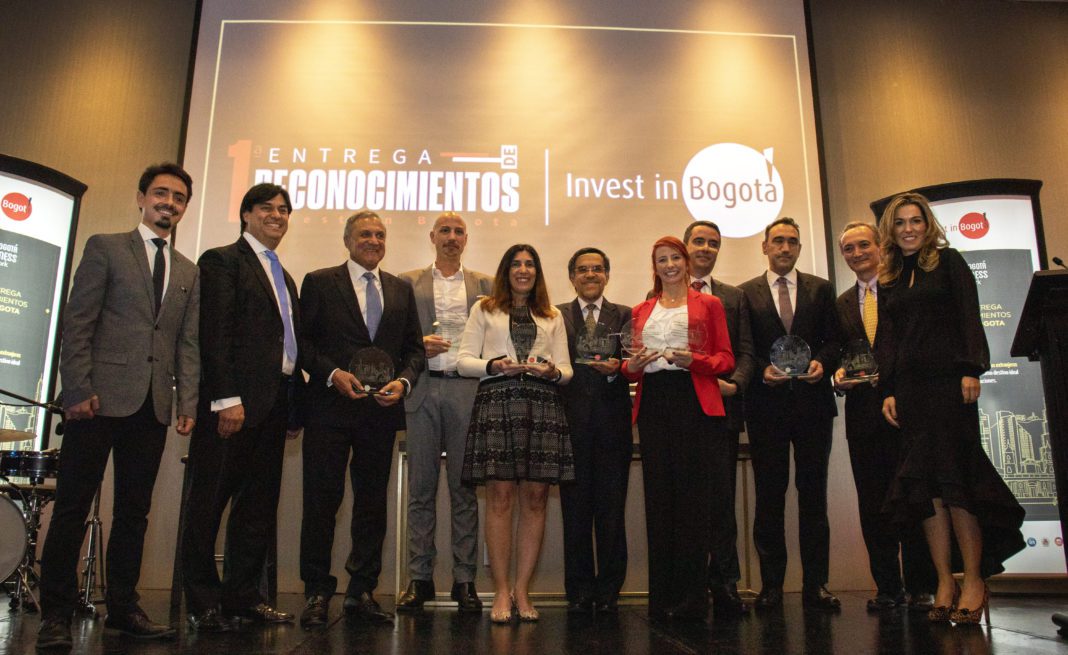 In a ceremony where more than 50 international companies gathered, Invest in Bogota, the investment promotion agency for the city, gave for the first time a recognition to the companies that contributed the most to the economic development and the quality of life of people in Bogota during 2017 -2018.

Bogota, April 12, 2019.  This Thursday, in the presence of more than 50 international company representatives, Invest in Bogota awarded the foreign companies and highlighted the positive impact that foreign investment brings to local economy.

During the award ceremony, which took place in the new Hilton BogotaCorferias Convention Center, Juan Gabriel Pérez, Invest in Bogota‘s executive director, reaffirmed the importance of the city transformation due to the foreign investment. “This is a special night in which Invest in Bogota will like to greet each of the companies for trusting the city. I’m convinced that with your support, Bogota will continue to position itself as one of the best destinations to do business in Latinamerica”, he added.

Bogota has received foreign direct investment calculated in around 27 billion dollars between 2008 and 2018, which can be seen in the 110.000 employment jobs that have been created in the city. Pérez emphasized that beyond the numbers, foreign investment coming from these companies impact positively in the citizens by improvement in the quality of life.

The companies, awarded in nine categories, were recognized for their contribution in the employment creation, exportations, media impact, service provision, city transformation, impact in the retail and manufacture sector, between others.

The French company L’OREAL, that recently opened a cosmetic production plant in the city, won two of the awards. The same number of awards received Scotiabank, which through their experience global center, located in the capital, aims to reach near the 3.000 jobs at the end of 2019.

Furthermore, in a special category, HLR Group (Chile) and TuBoleta (Colombia) won an award for the development of the first PPP of private initiative in Colombia, that led to the creation of the Movistar Arena Bogota.

All the nominated and winner companies in the recognition award, have been supported by Invest in Bogota during the investment process in the city.

Since 2007, date in which the promotion agency started operating as a joint initiative of the Chamber of Commerce of Bogota and the Mayor City Hall, it has accompanied the arrival of 336 projects with an estimated investment of more than 2.3 billion dollars.
List of winner companies by category

Invest in Bogota recognition in the Manufacture category:
L’OREAL
For the cosmetic production plant construction in Bogota, inaugurated on April 9th, 2019, which the company expects to keep exporting products to 13 international markets.

Invest in Bogota recognition in the employment creation category:
SCOTIABANK
for the generation of high-quality employment in their global shared service centre. These projects expects to count with 3.000 employees to the end of 2019.

Invest in Bogota recognition in the Retail category:
PRICESMART
Their innovative offer for consumers, through the membership program, signified a change in the production model distribution. Also, their integration with the local producers and their social responsibility program.

Invest in Bogota recognition in the Services category:
SCOTIABANK
For the instalment and expansion of the global excellence center, which has transformed the shared services provision, model.

Invest in Bogota recognition in the City Projects category:
SETEC
For the contribution in the transformation of the city, by the contract award of the First Metro line of Bogotá in the project management.

Invest in Bogota recognition in the Media Impact category:
BELATRIX
For the articulated management with Invest in Bogota to communicate in media the opening of the software development center.

Invest in Bogota recognition in the Exportations category:
L’OREAL
For being the company, supported by Invest in Bogota, that registered the most amount of manufacture exportations in an annual average (2017-2018).

Invest in Bogota recognition in the Creative Industries category:
GRUPOSECUOYA
For establishing their headquarters for Latin America and their outsourcing operation for Claro TV channels in Colombia.

Invest in Bogota special recognition to Projects that transforms the city:
HLR GROUP AND TU BOLETA
For the development of the first PPP private initiative in Colombia, that allowed the creation of the Bogota Arena Movistar.