Home Business First Brexit, Now Trump – What A Swing To The Far Right... 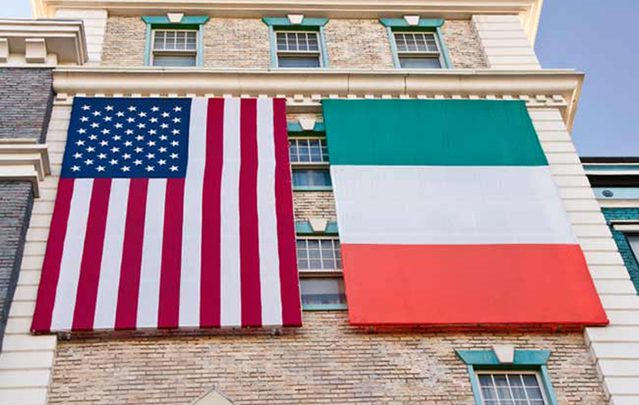 What’ll happen Ireland betwixt Brexit and a Donald Trump presidency? What will become of the small, open Irish economy as it gets squeezed from the west and the east by a swing to the far right? Richard Fitzpatrick investigates.

Donald Trump – or his ghostwriter – talked in his book Think Like a Billionaire about a light bulb going off one day in his head. It was a game-changer, he wrote: “The day I realised it can be smart to be shallow was, for me, a deep experience.

” It’s hard to fathom Trump. Does he have principles? Or is everything a gambit? Will he leave the protectionist rhetoric behind on the campaign trail and embrace pragmatism in office? Or will he continue to be outlandish? We can’t tell. What we do know is that he’s brought doubt – as regards the Irish economy and globally.

“Uncertainty is the big thing we’re worried about with Trump’s presidency. He’s such an outlier,” says Joe Haslam, chairman and co-founder of Hot Hotels and an associate professor at Madrid’s IE Business School.

“There’s not a sense that if he has a good first year [that he might settle down]. There will always be the capacity for uncertainty. In an uncertain environment, people baton down the hatches. They don’t make investments. Ireland is a small, open economy so we’re exposed to global winds – of Trump, say, starting a war with China. It’s not so much the specifics of tax policy; it’s the general uncertainty that a Trump presidency will bring, which will make people a lot more cautious about making investments. Ireland will suffer because of that.

”Haslam points to a recent former Italian president to provide some interesting context about how a Trump presidency might unfold. “If Trump starts to get polled as an unpopular president, he’ll start to do populist things. There is a precedent with Silvio Berlusconi. He did largely what people expected he would do. He changed laws to be favourable to him. He didn’t do anything for the common man. Italy essentially had no growth while he was president.

” Most attention by Irish commentators on Trump’s election promises focus on his pledge to slash the corporate tax rate from approximately 35% to 15%, and its likely impact on the Irish economy, given it would take from the attractiveness of Ireland’s 12.5% corporate tax rate. According to Stephen Moore, Trump’s senior economic advisor, if Trump follows through with the tax cut it would lead to a “flood of companies” leaving Ireland (despite the cost of re- jigging their global supply chains).

This would be an appalling vista, given that of the 187,000 people who are employed by overseas firms in Ireland, a sizeable 73.26% of them work with US-owned corporations, according to the latest research from the IDA, Ireland’s inward investment agency.

Frank Barry, professor of international business and economic development, Trinity College Dublin, offers a counter argument, however in the event of a lower US corporate tax rate: “US companies don’t primarily come to Ireland for tax reasons. They come to gain access to the European market because of time differences. They want to diversify across international geographies, for all sorts of reasons. Once a multinational decides to set up in Europe, then it is the decision where to set up that works in Ireland’s favour because we have a low rate of corporation tax.

“Let’s say an American company comes to Ireland, it pays 12.5% tax. Let’s say the alternative would be to go to Germany where the rate is close to 30%. Reducing the US tax rate to 15% would be much more damaging to a high-tax European country like Germany than it would be to Ireland.

“An American multinational corporation would be even more likely to establish in Ireland than elsewhere in Europe. We’re not competing with America. Once American corporations decide to come to Europe, we’re competing with other European jurisdictions so the benefit of our low rate remains in place.”

Haslam points out that the likelihood of a hard Brexit – following the UK electorate’s decision to trigger article 50 and exit the European Union – has far greater immediate consequences for the Irish economy than the possible fallout from an isolationist or erratic Trump presidency.

Dermot O‘Leary, chief economist, Goodbody Stockbrokers, adds that the impact of Brexit on the Irish economy is already evident even though it has still to be enacted.

“The impacts of Brexit on Ireland are time inconsistent,” he says. “We’re already seeing the negative effects of Brexit seep through. The currency has already [fallen]. We are seeing particularly low-margin industries in the agri-food sector being impacted; there’s an increase in cross-border trade and in retail sales numbers, for example with car imports from the UK.

“The potential positive effects come in 2019 – when the current expectation of an exit is time- lined – and later when you get a potential migration of firms from London and [other British cities] to Dublin and elsewhere. It seems the cities will be most affected. Financial services are the one big potential benefit for Ireland and also IT and legal. We’ve seen a surge in UK- based lawyers trying to get registered here in Ireland so they can use their skills across the European Union.

” Barry stresses that the European Union can’t allow a “soft” Brexit – i.e. giving the UK favourable terms – because it could unsettle the whole European project, causing a domino effect where other member states would push for concessions, or exits.

In the event that the UK loses its tariff-free access to the European Union, it could lead to a host of tariff-hoping corporations setting up on both islands, repeating a trend from early in the last century when British and Irish companies set up overseas operations to safeguard their traditional markets with first the threat of Home Rule in 1914 and later following the 1921 Anglo-Irish Treaty.

Guinness, for example, set up its Park Royal brewing operation in London. Dundalk cigarette maker Carroll’s, which had grabbed market share by providing free cigarettes to front-line troops during the First World War, set up a beachhead in the UK in 1923. Jacobs, the Irish biscuit manufacturer, had more people employed in its plant in Liverpool than it had in the 26 counties combined. Meanwhile, several large British brands, including Dunlop, Clark’s Shoes and Cadbury’s, travelled the other way across the Irish Sea, becoming some of the biggest manufacturers on the island of Ireland.

What will happen Northern Ireland and its relationship with the Republic of Ireland in the event of a hard Brexit is the great unknown. Here we can also look to history for guidance, says Haslam.

“The movement of currency affects the ‘Newry situation’, he says, referencing the border town. “Sainsbury’s Newry Superstore just off the Dublin Road has a feast or a famine depending on fluctuations. Anything that happens in Northern Ireland is such a political thing, especially if Sinn Féin gets into government. Northern Ireland issues are its core strength. They’re bad in economics. In a stable situation, for example, they have to explain how they’ll pay for health services, education but if there’s a game of ‘Who can be the biggest nationalist?’ that will always favour Sinn Féin.

“We’ve got used to the idea that there isn’t really a border. If we had to erect one again there would be a cost. For a start we would have to transfer back hundreds of members of the southern police force that were reassigned to other districts after the Good Friday peace agreement. You could have people coming south. The big thing of course is the annual £11 billion subvention from Westminster – and all those good UK civil service jobs – which basically keeps the place alive