The World Economic Forum launches today the ASEAN Digital Generation Report 2021, a special edition of its annual ASEAN youth survey report series, which examines the impact of the pandemic on personal income, savings and the role of digitalization in the region’s economic recovery. The report’s survey, conducted with close to 90,000 participants from Indonesia, Malaysia, the Philippines, Singapore, Thailand and Viet Nam, also flags the gaps needed to build a more inclusive and sustainable economy, namely: access to technology, digital skills training for all generations, and measures to enhance online trust and security.

Notably, respondents from these two sectors are among those who also reported a decline in income. This could be because when people experienced a fall in income, they started new businesses in the wholesale and retail trade sector to leverage e-commerce opportunities.

A majority of respondents have adapted to the challenges of the coronavirus pandemic through significant digital adoption. Across ASEAN, 64% of respondents have digitalized 50% or more of their tasks, as have 84% of respondents who are owners of micro, small and medium enterprises (MSMEs). Respondents who reported greater levels of digitalization of their work and business reported lower levels of income decline. Similarly, business owners with an online presence were more likely to report an increase in savings (24%) and income (28%) compared to those without one (18%). 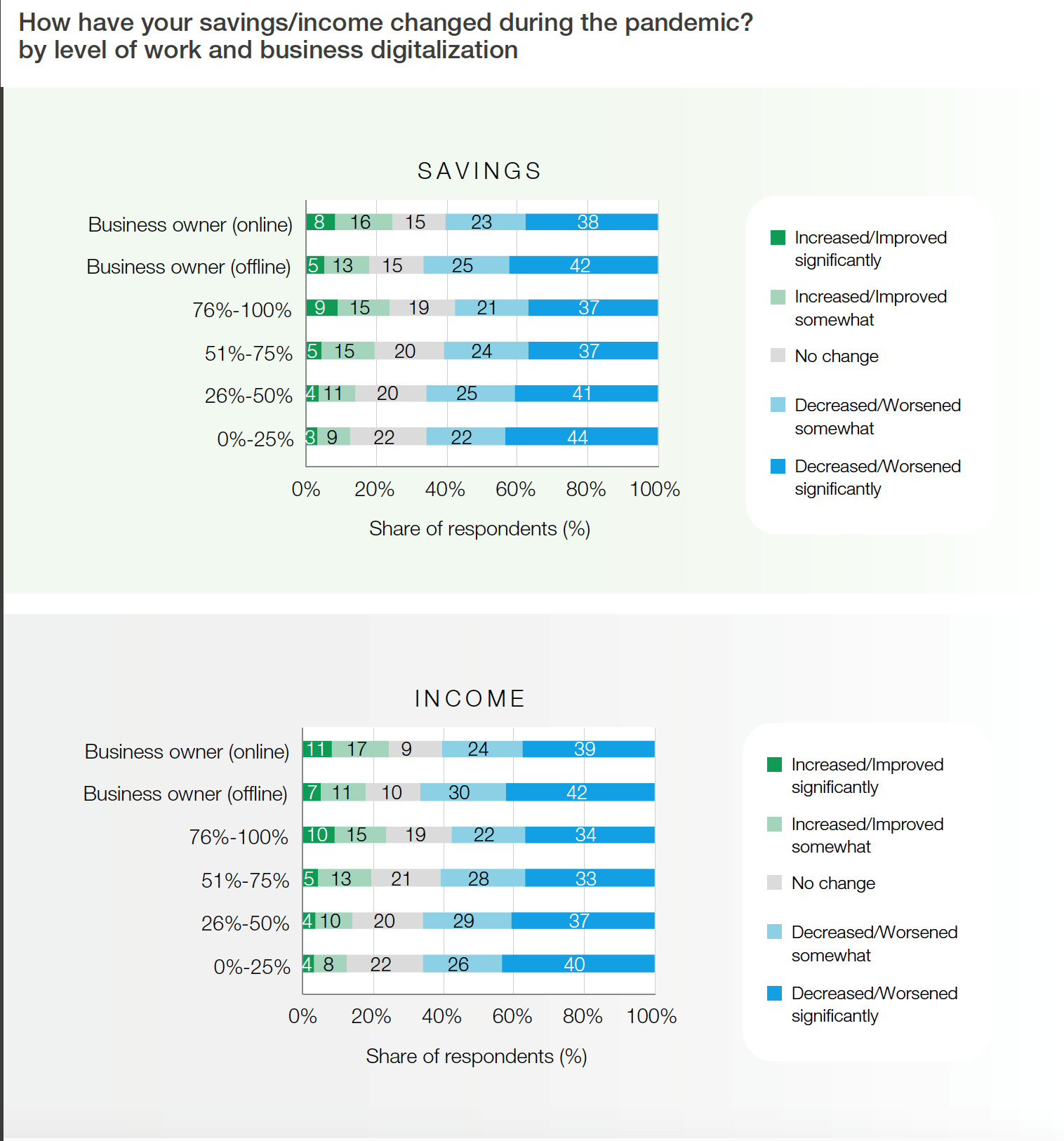 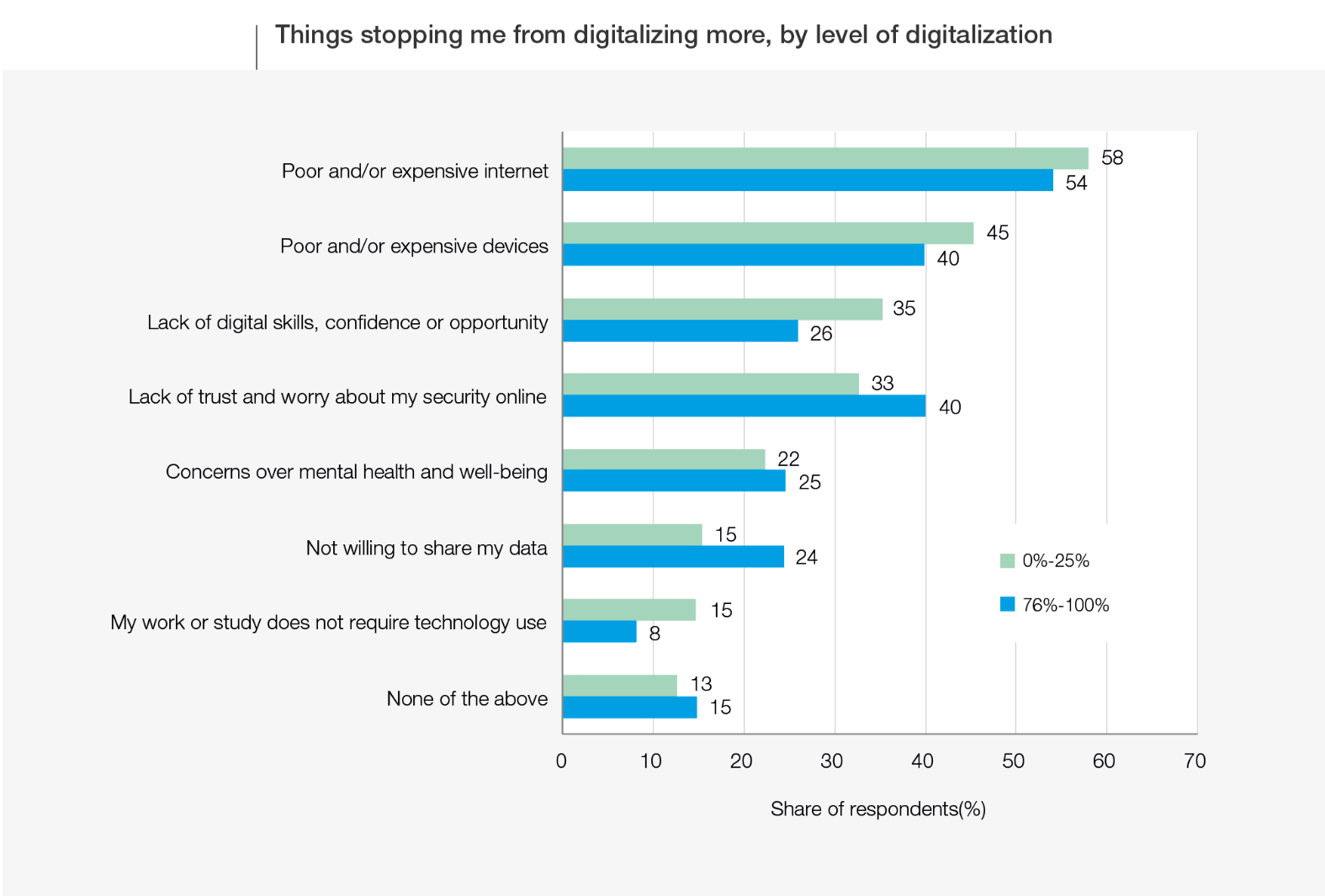 The identified obstacles were consistent across all six countries surveyed. As such, multistakeholder and regional joint actions are needed to unlock the full potential of ASEAN nations in the digital age and narrow these gaps.

“Through this annual survey, we wanted to understand the views, priorities and concerns of the digital users in ASEAN and gain statistical insights that will help inform and shape relevant regional policy,” said Joo-Ok Lee, Head of the Regional Agenda, Asia-Pacific, World Economic Forum. “The survey showed improving the quality and affordability of ASEAN digital infrastructure, equipping the ASEAN workforce with appropriate skills and enhancing people’s trust in the digital environment are crucial to bring ASEAN over the tipping point for inclusive and sustainable digital transformation.”

“One of the key findings was that digitalization has a ‘flywheel’ effect wherein users who had first experienced the benefits of technology were more eager to deepen their levels of digitalization,” added Santitarn Sathirathai, Group Chief Economist at Sea, a Singapore-based global consumer internet company. “It is critical for the public and private sector to work even more closely to lower any friction and barriers, which may prevent the positive digitalization momentum from taking place. Through this, digitalization can enable post- pandemic recovery in an inclusive and sustainable way.”

Between July and August 2021, the survey polled participants from Indonesia, Malaysia, the Philippines, Singapore, Thailand and Viet Nam. Some 77% of respondents are youths aged between 16 and 35, 56% female and 10% business owners.

This year’s edition continues to monitor the impact of the pandemic on respondents, explores how the ongoing digitalization has benefited their life and society in the real economy, what stands in their way of further digitalization and maximization of such benefits, and how to tackle the identified obstacles.