Home Business How Will Smartphones Change In The Future? If you’re reading this, it’s likely that you have a smartphone of some kind in your pocket. In the span of just a few years, smartphones have gone from being uncommon to the norm – and it doesn’t look like things are slowing down anytime soon. But how will technology continue to alter our lives?

You might be surprised to learn just how far smartphones have come in the past years. In 2010, smartphones were still a…well, a phone. They were only 5-inches long (including the antenna), and weighed 4 pounds. Battery capacity was also far from stellar – most were able to last, at most days with moderate usage. And everyone seemed to carry a flip phone instead of a smartphone. 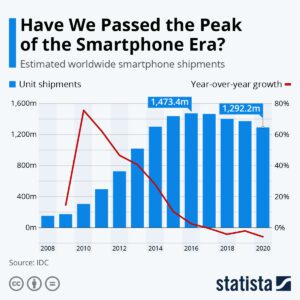 Today’s smartphones are on average 6 inches long, and weigh less than 1 pound. They can contain large batteries designed to go all day without needing a charge – and they’re expected to be thinner than ever before as well.

The first iPhone could only hold 2.5 gigabytes of data, and had no external storage at all. That falls far short of today’s 1 terabyte – a thousand gigabytes – on its own.

The camera resolution has also blown past its counterparts. in 2010 cameras were typically 3-megapixels, with 8MP being considered high-end. Today’s smartphone cameras can go as high as 48MP on the back camera on the rumored iPhone 14.

What else can we expect to see in the next five years?

At this rate, it seems as if anything could happen. Here are a few predictions:

iPhone Thinner Than Paper (and Even Thinner) – Apple certainly thinks that slimmer is better – and they might be right. Ever since the first iPhone was introduced in June 2007, the phone has been making its way thinner with each new iteration of iOS (or Android). Today’s iPhone 13 is a slim 240 grams. Apple also has a patent on making iPhones even thinner, but it’s unclear as to what they’ll be able to achieve in the next five years.

Beyond that, though, things get a little hazy when it comes to just how far Apple will be able to push the limits of phone design. But for now, we can rest assured knowing that our smartphones are already the thinnest that they could possibly be. The more interesting prediction might be the iPhone that won’t even have a screen at all.

5G Wireless Networks – Despite being something of a buzzword right now, 5G wireless networks are nothing short of revolutionary. They’re faster than 4G, and will be increasingly common in the years to come. Right now, carrier gigabit internet is being tested in several cities around the world, but it’s currently very limited – even with antennas in the air. In limited areas, speeds can exceed 100Mbps – but there are still plenty of obstacles that will prevent widespread deployment of 5G wireless networks for at least one or two more years.

Ultra HD Displays – Right now, there are several OLED displays in the market that are available on smartphones. The resolution is stunning, with astonishing pixel density – but the cost is still very high. That’s why they’re only present in high-end phones such as the Galaxy s22 and the iPhone 13. But what about a few years down the road?

There’s little doubt that resolution size will be cheaper than ever before in the next couple of years. With prices falling every year, it wouldn’t be surprising to see resolution size become more affordable.

With the way things are going, the future of smartphones could be a little bit different than we’ve ever seen before. We could be wearing our smartphones in the future with the way wearables have taken off, with projected screens beaming out of watches or smart glasses with screens built into them. But that’s a very good thing – you never know what you’ll find in store for you in the next five years!